Before I begin let me wish you all a very Happy Easter.
Last night after the evening Mass when I happened to be outside the hall, I glanced up at the sky and noticed the full moon glistening. Apparently during this period the full moon is referred to as pink moon. On gazing at the full moon I recalled the fact that Easter Sunday was decided as the Sunday after the full moon, following the day of the vernal equinox. This year however we had Easter just after the full moon, which I think is a rather rare phenomenon.
The Jewish feast of the Passover has been declared as falling on the 15th day of the month of Nisan. However, when we try to apply the month of Nisan to the Gregorian calendar, it apparently becomes hard to identify the date. In the Catholic Church, it was stipulated during the Council of Nicaea (325) that Easter falls on “the Sunday after the full moon after the day of the vernal equinox,” and so, even today, Easter is set in accordance with that rule.
On gazing at the full moon last night there was something else that was evoked within my mind. It was a song by Saigyo, wherein it is stated, “It is my hope to die beneath the flowers in Spring, around the time of the full moon in February.” 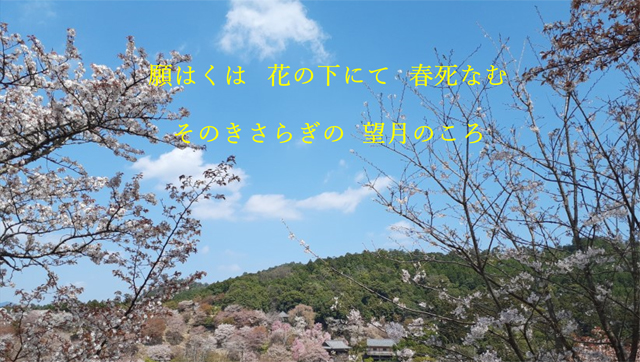 Just a week earlier I had gone over to Mt. Yoshino in Nara, where I perceived the cherry blossoms that are referred to as “Ichimoku Senbon.” It was my first visit to the place, and just as rumor had it, the cherry blossoms were delightful. Indeed, I had never as yet witnessed such an exquisite cherry blossom landscape.
Close to “Nakasenbon” is a monument to Saigyo that has the following tanka poem inscribed, “if you go to bed on a wooden book you will enjoy the coverlet of the Mt. Yoshino flowers in the Spring breeze.” 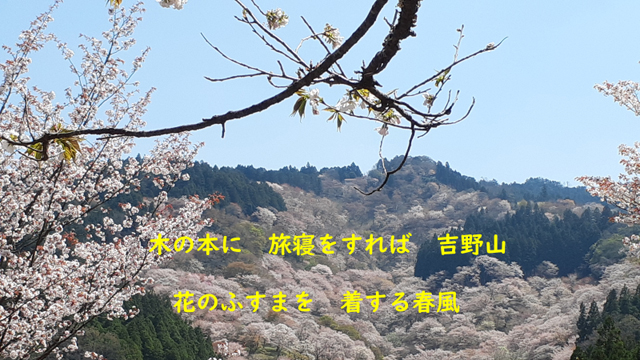 It was truly an ambience that made me want to take a nap.

Due to the fact that I from the beginning had a keen interest in Saigyo, on my return to Tokyo I investigated a number of issues concerning him. I learned that there were many songs about the cherry blossoms of Yoshino, some of which matched my current appearance and thinking. Hence, I am considering the idea of studying about him for a while. We have the following utterance of his, “comfort the flowers every Spring, and you will rise above the age of 60.” I who am over 65 years of age and on the verge of joining the ranks of the elderly, feel the same way. 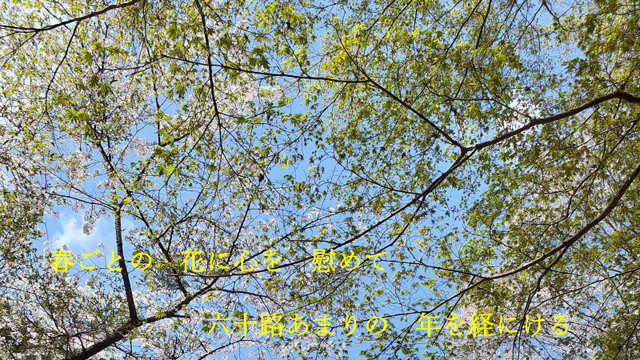 Those words on “wishing to die in Spring…” are said to have been penned about 10 years prior to Saigyo’s death, and he died at the age of 73. At around the time he composed the song about “rising above the age of 60,” he perhaps composed also the song about “wishing to die in Spring.” In actual fact however it appears as though he died on February 16, the day after “the full moon of February” (February 15), when the Lord Buddha died.
The songs of Saigyo have exerted a potent influence on the Japanese view of life and death, and I am of the belief that this is often reflected in the expression “end of life,” which has grown firmly ingrained in current Japan. TV commercials dealing with issues such as death insurance, family funerals, small funerals and so on often have utterances like, “I do not want to be a botheration to anyone,” or “small and heartwarming funerals,” and so on. People often say they wish to die in a humanlike way, and hence they have no desire for excessive medical care. We also have what is known as woodland burial. “End of life” involves the idea as to how people wish to face death, and how they wish to be buried. Even within the Catholic Church acts linked to issues such as these are keenly undertaken.
Viewed from the standpoint of the Catholic faith, I am of the opinion that we should not stop at “end of life,” but rather, move on towards “resurrection.” Jesus bore his cross and died a pitiful death. His death was disheartening, even to the extent of forcing him to shout aloud, “Why have you forsaken me?” Yet, through that death God opened the gates to eternal life, annihilated death, and paved the way for a new and never-ending life. St. Paul declares that God handed over his only son to death and caused him to be raised. This used to be the proclamation of faith for the first Christians. With the word “resurrection,” Jesus became the first to establish a new relationship with God. In the case of people like us who have faith in the resurrection, I believe it vital that we do not remain at the stage of “end of life,” but rather proceed onwards to the stage of “resurrection.”
On Kioicho-dori that leads to Bentenbashi, the flowering dogwood and double cherry blossoms appear to compete with each other. Flowering dogwood has a tale that is related to the cross. Legend has it that the cross Jesus carried was made from dogwood trees. The flower has four petals with dark speckles on the tips, which perhaps reminded people of a cross. Since it is a tree native to North America, it was not originally seen in Israel. Strangely however, although the day of the resurrection shifts every year, yet as Good Friday approaches, the dogwood begins to bloom. That was indeed the case last year, although Easter arrived about 10 days earlier. The sight of the flowering dogwood evokes within my mind images of the cross, while the sight of the double cherry blossoms stirs up within me, feelings linked to the radiance of eternal life. Wouldn’t you like to take a walk along that way? 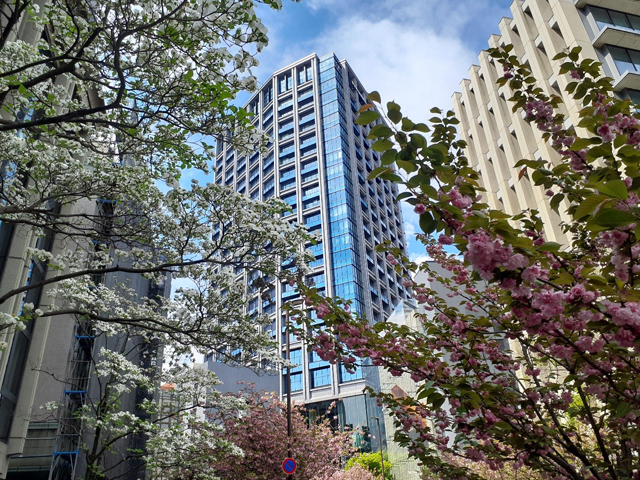